It is doubly fitting that Edward Dominic Fenwick should be the subject of the initial publication of Project OPUS: A History of the Order of Preachers in the United States. First, Fenwick established the initial Dominican province in the United States. Second, no account of his heroic and colorful life has been published in more than seventy years. The many documents now available, including those collected assiduously by the historian Victor O'Daniel, reveal the stature of Fenwick as a model of Christian evangelization for today and tomorrow. 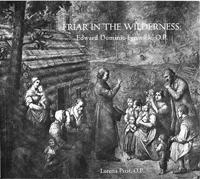 "I have become, as they call me here, an itinerant preacher. It often happens that I am obliged to traverse vast and inhospitable forests where not even a trace of a road is to be seen.

Many times, overtaken by night, I am obliged to hitch my horse to a tree and making my saddle a pillow I recommend myself to God and go to sleep with bears on all sides."
-Edward Fenwick to a friend in London, 1818.

Friar in the Wilderness (pdf) 5.9MB

Project OPUS: A history of the Order of Preachers in the United States, Collaborative Research Sponsored by the Dominican Leadership Conference. Copyright ©1994

3 Dreams of an American Province

6 Bishop of Forest and Wilderness

9 A Man of Ideas and Ideals

Sister Loretta Petit’s interest in researching and sharing Dominican history was cultivated early in her academic career. She pursued her master's degree in American history at The Catholic University of America and her doctoral studies at Western Reserve University. Postdoctoral studies took her to the University of London where she studied comparative education. Sister Petit’s skill as a teacher, researcher and writer is evidenced by her accomplishments in these areas. She was both a teacher and principal at St. Vincent High School in Akron, Ohio, a professor at University of Dayton in Dayton, Ohio, and an exchange professor at both the Catholic College of Education in Sydney, Australia, and the Federal University of Parana, Brazil. She also received grants for her various research interests from the University of Notre Dame and the University of Dayton. Along with Friar in the Wilderness, Sister Petit’s writing can be found in the Project OPUS work Dominicans at Home in a Young Nation, which was published in 2001.

Sister Loretta Petit’s teaching experiences at St. Vincent High School prompted her specific interest in Edward Fenwick, OP. The principal of the school wanted a small biography of Fenwick for students and their parents. This book is a culmination of her research.