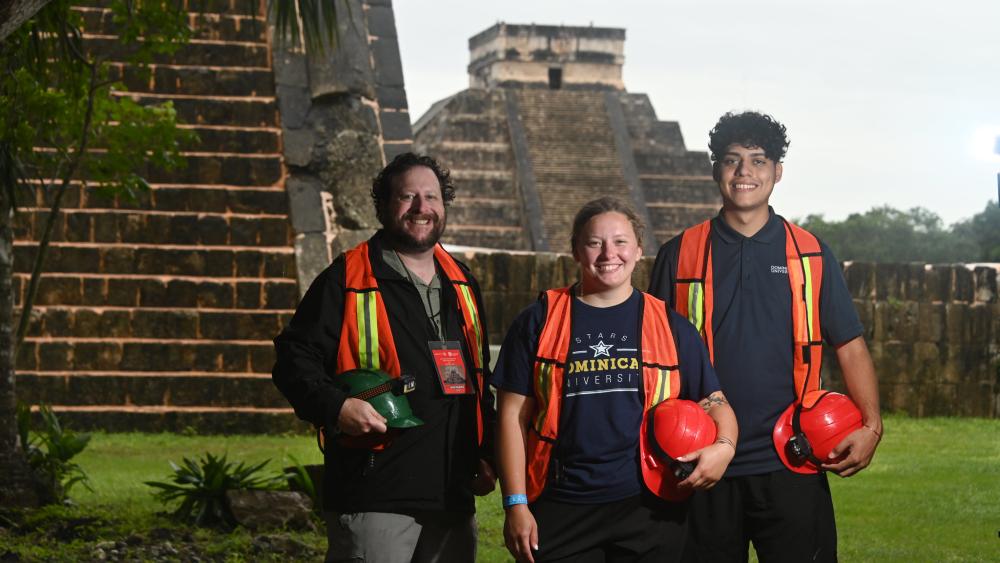 In the tunnel of a 1,000-year-old pyramid, Dr. Joseph Sagerer checked his internet connection.

The Mayans who built the Temple of Kukulcan were experts in harnessing the most advanced technology of their day to worship their feathered serpent god — but even they couldn’t imagine the wonders of Wi-Fi.

What would they think of a group of scientists and college students designing a device that uses particles from space — muons — to explore beyond the stone they painstakingly laid centuries ago?

“I think they would say what we are doing is somewhat strange,” Sagerer, a senior physics lecturer at Dominican University, said with a laugh. “But they did use astronomy and the timing of the movement of the sun to design the pyramid. I think if you gave them the knowledge about muons, it would be an extension of their using the heavens for understanding and to inspire.”

In August, Sagerer, accompanied by Dominican students Oscar Meza Quintero and Avery Brown, traveled to Chichen Itza, an ancient Mayan city in Mexico’s Yucatán Peninsula, to prepare the pyramid — built between the 8th and 12th centuries and commonly known by its Spanish name El Castillo — for ongoing study using a muon detector.

Muons are particles from space, similar to electrons, that can help identify where voids may exist behind walls, preventing the need for invasive archaeological excavation. “It’s basically like an X-ray machine for bigger structures,” explained Quintero, a junior who is majoring in math and mechanical engineering.

“The goal is to hopefully see a void or empty space that no one knows about yet,” added Brown, also a math and mechanical engineering major. “I’m hoping that happens, but no one knows for sure.”

The muon detector is being developed for use inside the pyramid through the Non-invasive Archaeometry Using Muons (NAUM) project, a four-year partnership between Dominican University, Chicago State University, Fermilab, Autonomous University of Mexico and the National Institute of Anthropology and History in Mexico. The detector itself is being built over the next year with anticipated completion and installation in the winter of 2023-24.

Once installed, the detector will send back images to Dominican through an internet connection. If something of interest is detected or seen in the images, it will be up to archeologists to determine whether further exploration is warranted. So far, a team of Dominican students has created a 3D computerized model of the pyramid, conducted simulations, gathered and studied data, and created a mock detector to bring to the site.

During the five-day summer visit, the Dominican team tested the mock muon detector in the pyramid’s tunnel, explored how electricity can be restored to the tunnel so the detector can operate, and met with archeologists working in the area.

This was Sagerer’s second visit to El Castillo this year and the first to include students. “Students are always blown away,” he said. “You get to go where the tourists don’t go and you get the sense of, ‘OK, this is a big project.’

Working on pieces in the lab, it’s all theoretical. But when you’re at the site, you see it’s real and it’s happening.” Michael Guadarrama, a Dominican graduate who worked on the NAUM project as a student, noted that there are many mysteries still hiding within El Castillo, which was built over an older pyramid that houses a stone Mayan figure known as a Chac Mool. Evidence of a third pyramid within the structure has also been uncovered.

“Just being able to find something to convince (archaeologists) to explore more would be great,” Guadarrama said.