‘She Loved That School Beyond Belief ’ 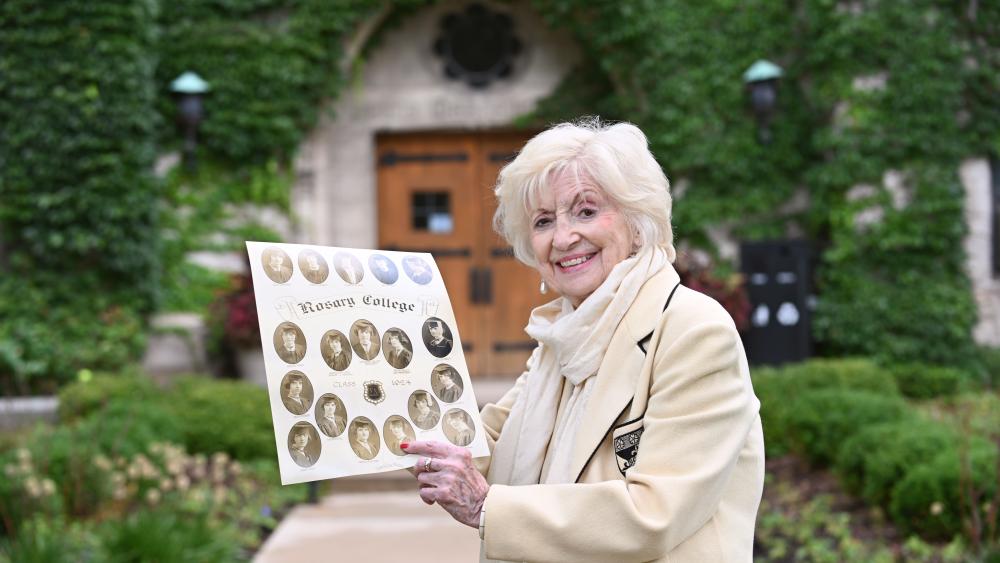 Ellen Bendry ’57 points to the graduation photo of her mother, Ellen Hill ’24. Hill attended Rosary College when it opened in 1922.

When Ellen Bendry ’57 speaks of her mother’s time as one of the first students to enroll at Rosary College, Rudolph Valentino has a starring role.

It was 1923 and a young Ellen Hill ’24, with three of her classmates, trekked to downtown Chicago for a day of shopping. They had permission from the Sisters at Rosary College for this excursion, but not for what else they had in mind.

“What they really wanted to do was get a look at ‘the sheik’ — Rudolph Valentino,” Bendry said. “Things were strict at Rosary then. Shopping was OK, but to take a peek at this guy? No.”

The group found the hotel where the heartthrob movie star was staying and got all the way up to his room — where the actor appeared at the door. The giggling girls quickly fled upon catching a glimpse of their idol, but word of what they’d done got back to the Sisters, who began considering their punishment. Would their fathers be called? Would they be expelled?

Thanks to the intervention of a Sister known only to Bendry as Sister Tommy, Hill and her classmates were allowed to stay at Rosary College. And Hill never forgot it.

“My mother kept in touch with her until she died,” Bendry shared. “For years we prayed for her. I hope she’s going to let us into Heaven when it’s our time to go up!”

The memory of the care that Bendry’s mother was shown while a student stayed with her throughout her life, and she often remarked how fulfilled and at peace she felt at Rosary College, her daughter said.

“She loved that school beyond belief,” Bendry said. “She loved all the nuns and respected them. It was nice to hear her talk about Rosary, which she did very often.”

Hill’s education began at St. Clara College, but when the new college campus in River Forest was completed in 1922, she traveled there to complete her degree in English and Latin.

Her father wanted his daughter to be college educated and, as an Irish Catholic, he wanted her to be taught by Catholic Sisters, Bendry said.

“Many women did not have that opportunity and she was well aware of that,” Bendry noted.

It was Cardinal George Mundelein who presented Hill with her bachelor’s degree, her daughter said. The class of 1924 consisted of 18 graduates.

After teaching Latin at a school in Michigan’s Upper Peninsula near where she was raised, Hill married Joseph Bendry and returned to the Chicago area where she and her husband raised three daughters. She maintained a bond with the Sisters she knew from Rosary, traveling with her family to the Sinsinawa Mound for visits, Bendry said.

Her mother’s love of Rosary College influenced Bendry’s decision to attend as well. While a student, her mother presented her with a Rosary blazer, which Bendry proudly wears to each Reunion event to this day.

And, like her mother, her connection to and support of the college has been life-long.