A Century of Opportunity 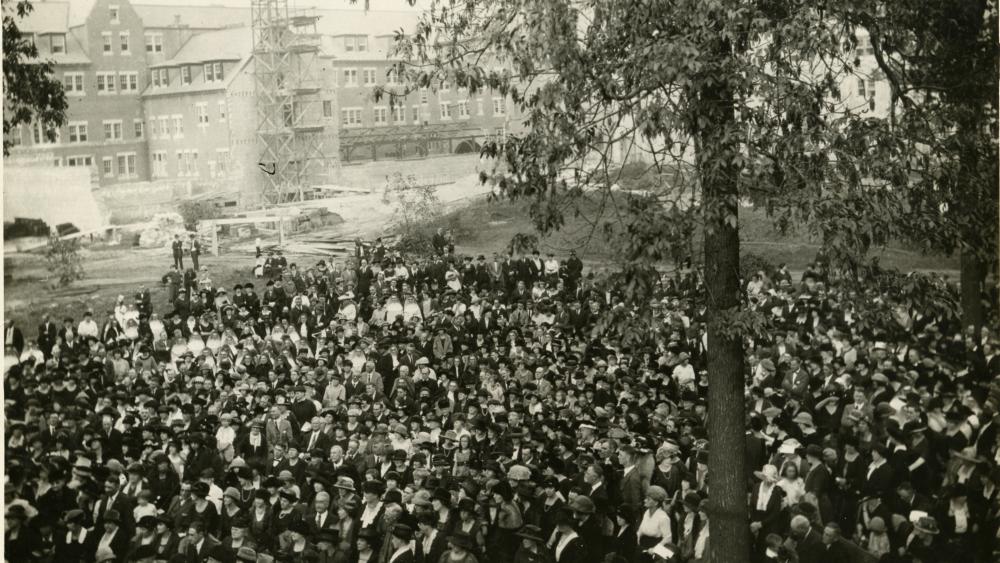 A groundbreaking ceremony on Feb. 2, 1920 celebrated the beginning of construction for Power Hall.

If you want to understand the history of Dominican University, you must first understand the driving force behind the institution that has remained true to its mission for over a century: The greater the need, the more Dominican rises to the challenge. It was that sentiment that sparked the Sinsinawa Dominican Sisters’ dream of Rosary College.

The story of our humble beginnings in River Forest is one of remarkable leadership, steadfast perseverance and inspired ingenuity. Led by Mother Samuel Coughlin, the congregation’s mission to build a women’s college rooted in faith and dedicated to providing a rigorous liberal arts education faced difficulties each step of the way. Yet, the Sisters remained undeterred despite being met with resistance from leadership, having their building plans stalled by World War I and facing a host of other challenges.

The Sinsinawa Dominican Sisters quickly established a reputation for excellence in education following the congregation’s founding in 1847. Just years after becoming an institution of higher education in 1901, St. Clara College was revered for its quality academics. But with St. Clara College’s existing campus bursting at the seams with growing enrollment and the immense logistical challenges of southern Wisconsin’s terrain, Coughlin knew changes were needed.

“(Mother Samuel) knew that something had to be done,” said researcher Rose Olszewski Powers ’77, MALS ’78, who is completing a historical account of Rosary College that was started by the late Sr. Jeanne Crapo. “There was a lack of transportation, no railroad stop and no road, and the need for more space caused by increasing enrollment. Thus began the search for a new location. It was Mother Samuel’s faith, her vision, her practicality, and her leadership that built Rosary College.”

Conversations around the relocation of St. Clara commenced in the early twentieth century, but talks intensified in 1912 when the Sisters learned of a proposal from DePaul University for an affiliated women’s college.

Coughlin expressed initial interest in the proposal, but ultimately held firm her desire for curricular and administrative independence.

In a letter to the Sinsinawa Sisters sharing an update on the derailed proposal, Coughlin urged prayer for “our temporal needs and the establishment of a first-class college wherever God wills.”

The congregation considered locations around the country that featured adequate railroad access such as Denver, Nebraska, Milwaukee and Madison, according to Dr. Christopher Allison, history scholar and director of the McGreal Center for Dominican Historical Studies at Dominican University.

Yet it wasn’t until 1916 that the congregation began to again consider the possibility of the Chicago area.

In a correspondence with Chicago Archbishop George Mundelein, Coughlin detailed thought to be high-end suburbs,” he said. “They had really good schools, really good homes and community services, and this emerging Catholic school network.”

Despite not yet having the full blessing of Mundelein, the congregation purchased land in Oak Park. But the sisters opted to sell it in 1917 after building plans were halted due to World War I.

Shortly thereafter, the sisters purchased property in River Forest — and the beginning of the university’s history in the community was officially underway.

Mundelein was still resistant toward the prospects of River Forest, but he knew a harmonious relationship with Coughlin was necessary to fulfill his hopes for a nationally regarded women’s institution in the Chicago area. Coughlin also knew the two would need to work together to help fund the new location.

“She needed his blessing to operate and fundraise in the archdiocese and to expand the impact of the congregation’s educational ministry, while he required Mother Samuel’s collegiate operation, including a roster of highly educated sister professors, to bring to fruition his dream of an elite Catholic women’s college in Chicago,” Allison said.

The relationship between Mundelein and Coughlin eventually grew into an affectionate friendship, according to Allison. Mundelein became a strong advocate as he championed the Sinsinawa Sisters’ years of effort to create a women’s college in River Forest.

“It is useless for us to shut our eyes to the fact that woman is coming out of her former environment and taking her place alongside of man in almost every avenue of professional and commercial activity,” Mundelein wrote a century ago in an address seeking parishioner donations for the fledgling Rosary College. “It would be criminal neglect on our part not to prepare her for her new responsibilities.”

Fundraising would continue to be key to securing the millions of dollars needed to build a college campus in River Forest. The Rosary College Campaign was created as a major fundraising arm, appealing to Roman Catholic parishes and would-be donors.

Promotional materials for one campaign aimed at meeting a $500,000 goal stressed the importance of a Catholic College for women.

“The world is calling trained women today,” a pamphlet read. “There is only one way to prepare and that is through College Halls.”

Another fundraising brochure detailed the early values of Rosary College, describing it as an institution “dedicated to high Christian purposes and which aims to give a liberal education that will train leadership in intellect, in the fine arts and in character.”

Catholics throughout the Chicago Archdiocese and beyond were urged to contribute. Each contribution, no matter how small, was logged in a ledger and exemplified the grassroots nature of the campaign.

“There were so many different sources of donations,” Powers noted. “Convents would raise money, the Sisters themselves would donate, school children in Dominican schools would give.”

Ground was finally broken in River Forest in the winter of 1920. The first collegiate building constructed at Rosary College was Power Hall. A former farmhouse, which became known as Rosary House, also stood on the property, predating the new buildings.

“Inspections of the institution last Saturday revealed…that, when completed, it will rank among the really beautiful academic structures of the middle west,” the Oak Leaves newspaper declared in June 1922.

A solemn dedication and blessing by Archbishop Mundelein took place on Oct. 1, 1922. “Thousands” witnessed the ceremony, “indicating that the institution is devoutly supported by both rich and poor,” the Oak Leaves reported.

The campus officially opened to students for registration on Oct. 6, but the school buildings were far from complete, Powers noted.

“Classes were held in bedrooms, outside or wherever they had space and there weren’t workers around,” she said. “Some floors had no flooring. Rooms had no doors, windows, things like that. And yet, they persevered.”

There were 55 Sisters on faculty when Rosary College opened, with an enrollment of 163 students, Powers’ research confirmed. The majority of students — 143 — resided on campus and came from 13 states and Canada. Rosary initially awarded three degrees: A Bachelor of Arts, a Bachelor of Science in home economics and a Bachelor of Music. Tuition was $150 and room and board cost $450.

The Chicago Tribune reported that among Rosary College’s first students was Madeleine Grambois, a direct descendent of famed Mississippi River explorer Louis Joliet. But the average student did not have such a celebrated pedigree.

“This was a social elevation project,” Allison said, explaining that the college drew largely “daughters of working-class people in the city” who represented immigrant communities.

One hundred years after bringing that vision to life, educators at Dominican University continue to carry out the sisters’ history of high-quality liberal arts education, relationship-centered support and the mission of educating the children of immigrants and first-generation college students.

“The liberal arts are crucial in this journey as knowing how to respect and analyze the historical, intellectual, and cultural roots of the many peoples in our world is often key to improving it,” said Mickey Sweeney, an English professor in the university’s Rosary College of Arts and Sciences. “We are committed to partnering with our students so that we can continue to develop the intellectual skills we need to assess current complexities and thereby solve what needs solving, innovate what needs reinventing, and create what needs to be reimagined.”