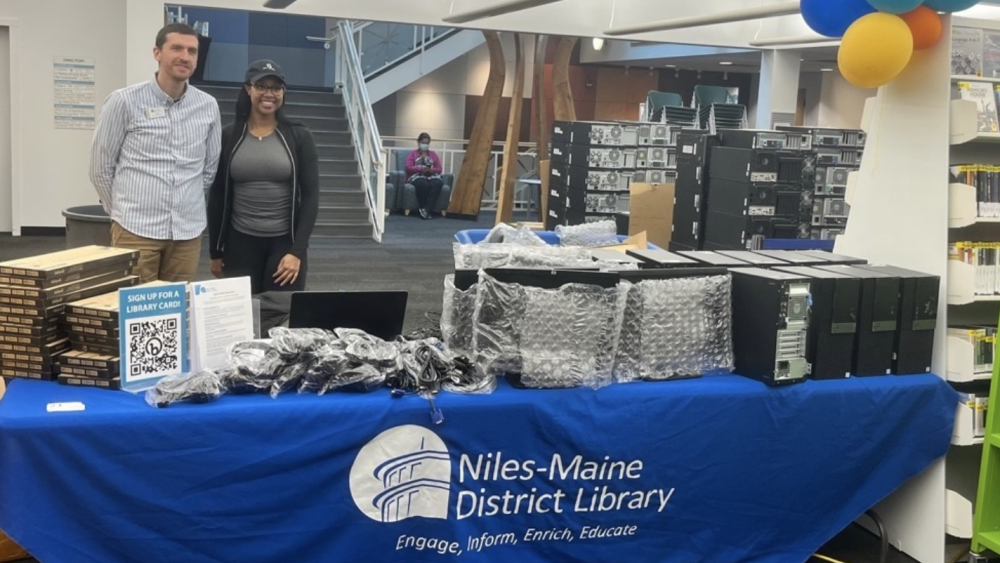 Todd Miller, who is pursuing his Master of Information and Library Science Degree at Dominican, helped organize a distribution event at the Niles-Maine District Library in partnership with PCs for People, a nonprofit organization that provides refurbished computers and internet access to low-income individuals and families.

The goal, according to the organization, is to give more people access to computers within their homes and also keep computer equipment out of landfills. The computers themselves largely come from businesses that have upgraded their technology, though the previous devices still have a usable life.

Miller, with Kayla Perkins of PCs for People, provided 96 people from around the Chicago area with desktop computers during the Sept. 26 event.

“It exceeded our expectations in terms of the number of people who signed up to receive a computer that day,” said Miller, a digital services assistant at the Niles-Maine District Library.

The recipients qualified based on a registration process that included verifying their income.

“It was a diverse cross-section of people,” Miller said of the recipients. “There were some young, some old, different ethnicities and races. It was a whole mixture of people who were there for computers.”

Miller became acquainted with PCs for People through his Information Divides course at Dominican. Professor Donald Hamerly explained that the summer LIS 710 course required students to identify a community partner involved in digital divide mitigation, engage with representatives, and report on the experience with suggestions for the community partner’s work.

“Todd took it a step further,” Hamerly said. “As he learned about PCs for People, he recognized he could do something at his library to benefit his community, so he arranged for them to do the community giveaway and he got the support of his administrators to make it happen.”

The digital divide refers to the gap between those with convenient access to computers and the internet and those without. Hamerly described the issue as a critical one within the Chicago area.

“There is an assumption that everyone has access to a computer when, in fact, that is not true,” he said, noting that so much of daily life — from communication to making doctor’s appointments — requires use of a computer. “Not everyone has access to the hardware and the equipment, and those who do don’t necessarily have access to broadband internet. That’s when the digital divide issue really begins. There is a great disparity in the Chicago area when it comes to access and affordability.”

Miller, who hopes to incorporate helping patrons access digital services in his future pursuits as a librarian, said his courses at Dominican have helped him better understand the digital divide issue as well as the needs of a multi-cultural community. He also hopes to coordinate another computer giveaway with PCs for People at the Niles-Maine Library, he said.

“It was a great experience to help people get computers and we’re hoping to do the program again, hopefully on a recurring basis,” Miller said.