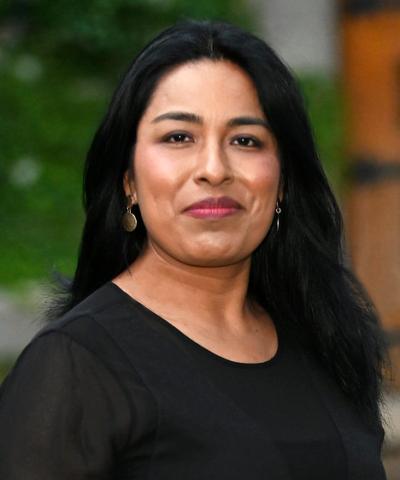 Hortencia Jimenez ’06 grew up in the remote region of El Bajio, Mexico. At the age of seven, when her father asked her what she would like to be when she grew up, she knew there were no limits to what she could achieve. As the seventh of ten children, politics and poverty did not make it easy to pursue her education. She was forced to drop out of school after the sixth grade and work full time.

After missing two full years of school, Hortencia’s older sister insisted she come to the United States. A new opportunity emerged to pursue the dreams she knew she could achieve. Her goal was a career that reflects the values of those who love the United States and want to make it a better place. Never forgetting her roots, but blending into American society, Hortencia became an active member and contributor to the community.

In 2006, Hortencia graduated with a bachelor's degree in Mathematics and Economics from Dominican University and joined the Federal Government as a Statistician. She has worked for several agencies including the Department of Transportation, Federal Drug Administration, and Census Bureau. After working for more than 8 years for the Government in Washington D.C., Hortencia’s worked evolved into IT and Analytics combining mathematics with technology. In 2017, Hortencia completed a master's degree in Aviation Administration from Middle Tennessee State University. She currently works in Aircraft Information Technology Maintenance Repair Operations involving Military Aircraft, which utilizes her strong STEM background to solve aeronautical problems. She is heavily involved in contributing innovations to the next phase of aviation.

Hortencia is passionate about preparing the leaders of tomorrow. She is an active volunteer for the Experimental Aircraft Association (EAA), working with youth to grow an interest in aviation, and White Plains High School, tutoring and counseling at-risk youth. Hortencia volunteers at the Newburgh Air Show that promotes awareness of pilots shortage and raises funds for military aircraft. Growing up in Guanajuato where shoes were one of the main commodities, Hortencia is currently working with shoe boutique to express designs of the threatened cactus that are unique to El Bajio. Her goal is not only to keep them alive but make the world aware that they exist. Hortencia may be one of the only members in her family to achieve a higher education, but is certainly not the only one who was influenced by her father. Her brothers are businessmen, one sister is an accomplished stylist, and others work for the school districts. Her family understands that they migrated from Mexico to the United States, but never let the barriers or chaos of social norms diminish their potential. They carry the values of faith, respect, and hard work. Hortencia has been an influence and support to her family and she is very proud that early this year she accompanied her mother to give her oath to become a U.S. citizen.

Nomination criteria include, but are not limited to:

Please email the Office of Alumnae/i Relations at alumni@dom.edu or call (708) 524-6286 with any questions regarding award nominations.