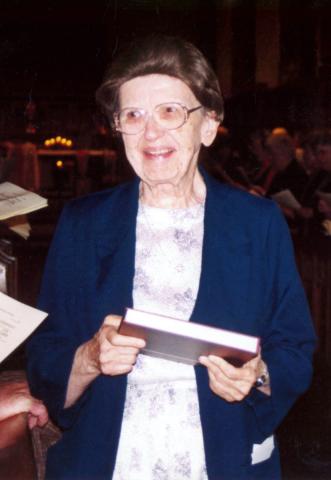 Mary Nona McGreal, OP (April 20, 1914–March 20, 2013), a Dominican Sister of Sinsinawa, an extraordinary historian and educator, is known for her countless accomplishments. Throughout her Dominican life, Mary Nona loved learning. She earned her BA at Dominican University (Rosary College) in 1942 and continued her studies at The Catholic University of America where she received a MA in education and PhD in the philosophy of education.

With Sister Joan Smith, OP, Sr. Nona authored Guiding Growth in Christian Social Living, a work that formed the foundation of the Faith and Freedom readers.

The series, published in the 1950s and 60s, integrated the social teaching of the Church into the curriculum of Catholic elementary schools.

From 1950–1968, she served as president of Edgewood College in Madison, Wisconsin. She expanded facilities, increased student enrollment and established a cohesive, core curriculum. After Edgewood College, Sr. Nona served as Vicaress of the Dominican Sisters of Sinsinawa from 1968–1977. During her term of office, she guided the Sinsinawa Congregation through the changes brought about by the Second Vatican Council and initiated greater collaboration among the larger Dominican family of nuns, friars, laity and sisters.

From 1984 until 2007, Sr. Nona directed the collaborative research and writing for the history of the Order of Preachers in the United States (Project OPUS). Volume I: Dominicans at Home in a Young Nation: 1786–1865 was published in 2001. The newest book, Volume II, entitled, Preaching with Their Lives: Dominicans on Mission in the United States after 1850, edited by Margaret McGuinness and Jeffrey Burns, was published in 2020 by Fordham University Press. In 2008, she was the first woman to be named an honorary member of the Historical Commission of the Order by the Master of the Order of Preachers, Carlos A. Azpiroz Costa, OP.

In 1977, Sr. Nona envisioned a center for the study of the history of the Dominican Family in the United States. In 2008, Dominican University in River Forest, Illinois established the Mary Nona McGreal, OP Center for Dominican Historical Studies. Sr. Nona’s vision became a reality because she firmly believed: “For the sake of present and future service to the church, there is a need to know the history of the Dominican family on mission together.”

To learn more about Project OPUS, visit any of the following links:

The Genesis of Project OPUS

NEW! Preaching with Their Lives: Dominicans on Mission in the United States after 1850