At the Intersection of Profit and Purpose

When Dahlia Mijarez ’16 started her summer internship at MB Financial, she didn’t even know what commercial banking was, let alone where it would take her. 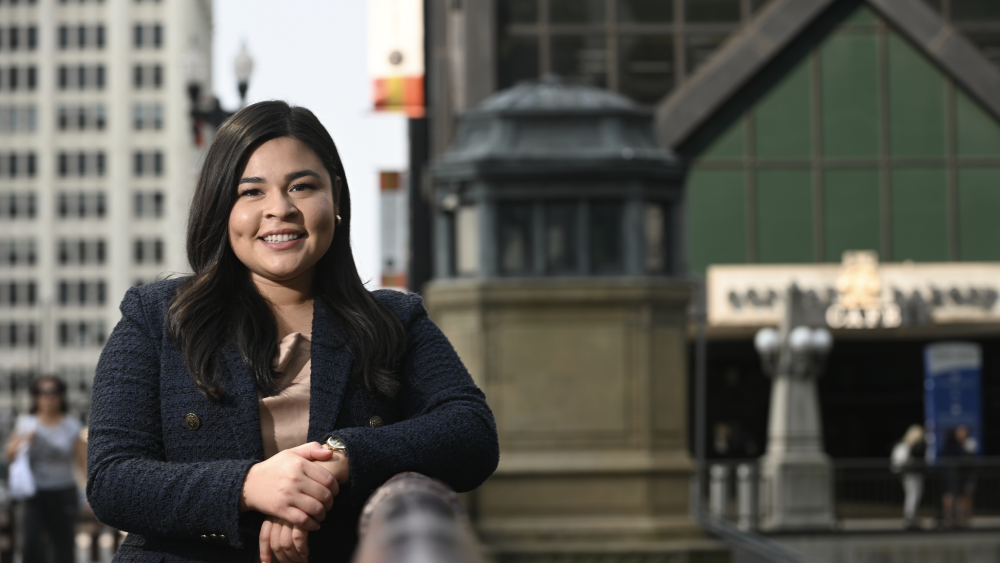 “It was an opportunity to go into the city, be at a bank and learn about what commercial bankers did,” Mijarez recalled.

The internship, arranged through Dominican University, led to a job offer. Now, Mijarez is an assistant vice president at Fifth Third Bank, and she’s recently earned a spot on the 2022 “Latinos 40 Under 40” list amassed by award-winning Chicago publisher Negocios Now.

Her talent and drive have distinguished the first-generation college student as a leader in her industry, positioning Mijarez to give back on multiple fronts including hiring Dominican interns, bringing her full circle. We caught up with her to learn more.

How did you arrive at your current position?

Mijarez: After graduation, I joined a two-year leadership development training at MB Financial (Fifth Third Bancorp merged with MB Financial in 2019). I was rotating through healthcare, nonprofit, commercial and industrial lending. I was most excited to join the group focused on nonprofit lending — a great way to arrive at the intersection of profit and purpose. I’ve been in that group since. I feel good about the work I do and the clients we serve: Nonprofits, universities, schools and social service centers across Chicago.

Can you discuss your volunteer work with Angeles Investors?

Mijarez: Angeles Investors is a mission-driven venture capital angel group aiming to find, fund and grow the most promising Latino ventures. It started here in Chicago, and it has taken off. We have members in New York, California, Florida, etc. It’s about building community and making meaningful change with dollars.

How did you discover Angeles Investors?

Mijarez: I first heard about venture capital from Samara Mejia Hernandez, Founding Partner at Chingona Ventures. I’d never seen a Latina speak about venture capital in the way that she discussed it. I followed her work at her prior firm for a while and noticed she joined Angeles Investors as an advisor. From there, I saw that they needed someone to help with membership. That fit what I was doing at the bank by networking with individuals who want to put their money to work and write checks for a purpose.

What excites you about this work?

Mijarez: Something I’m really excited about, that we’re working on for Angeles, is working with four Dominican interns. We’re introducing folks who may be first-generation as well to the idea of venture capital and bringing them into an industry they may not know about. Leadership is bringing people with you, recognizing doors that have been opened for you, and helping more people see opportunities.

Mijarez: It was definitely humbling; that list is so impressive. The coolest part is meeting other folks doing incredible work in different industries and recognizing how far we’ve come. Latinos are a huge population here in Chicago; to recognize their impact and influence, it’s awesome.

What did you find challenging as you evolved from a college student into a professional?

Mijarez: Imposter syndrome can be challenging for first-generation students. They may be juniors and still getting comfortable with the idea these careers that they’re training for are actually possible. They may not have seen folks in their community or network go after these careers. We don’t often see people who look like me in finance, commercial banking or investing. It’s important to share the message, “Go for it! You can do it!”