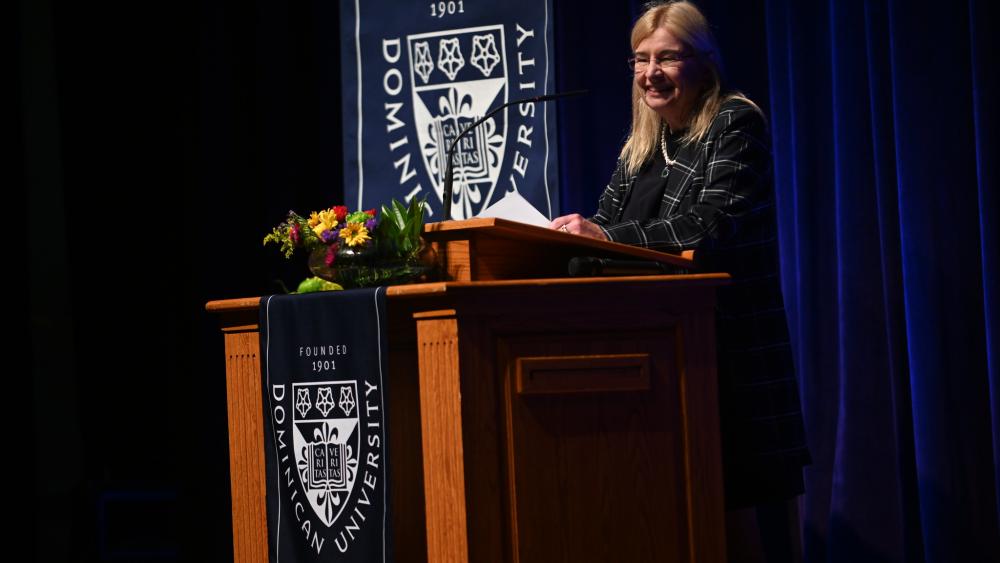 A scholar of American and Caribbean literature with a focus on female Caribbean writers, Niesen de Abruña came to Dominican from York College of Pennsylvania, where she served as founding provost and vice president of academic affairs. She also taught English.

Niesen de Abruña previously served in these same roles at Sacred Heart University in Fairfield, Connecticut and at Roger Williams University in Bristol, Rhode Island. She also held the position of dean at Heidelberg University in Tiffin, Ohio and at Susquehanna University in Selinsgrove, Pennsylvania.

During the annual McGreal Lecture this year, Niesen de Abruña spoke of the university’s history of working for social justice and its original mission to educate the women of immigrant families who did not have the same opportunities as men. Today, that mission has expanded, she noted.

“Those most in need of social justice are those who have been racially marginalized by the dominant white narrative of our culture and via the intersection of social class and race,” Niesen de Abruña said. “This group often includes first-generation, povertyaffected and racially minoritized students. Our role now is to serve that group so that we’re providing them with an extension of the Dominican mission: To serve those most in need who don’t have the same opportunities as white majority students.”

Niesen de Abruña holds a bachelor’s degree in English from Smith College, a master’s and Ph.D. in English from the University of North Carolina at Chapel Hill, and a master’s in higher education management from the University of Pennsylvania. Since 2016, she has served as director and principal investigator for the Digital Fellows Project with the Bill and Melinda Gates Foundation.

In her role at Dominican, Niesen de Abruña, who succeeded Dr. Jeffrey Carlson, is charged with leading and empowering university faculty while developing programs and experiences for students. She will also serve as the university’s chief academic officer, acting as an advocate for the academic mission of Dominican University.