The 16-hour days didn’t deter Alexis Garcia from staying at a Wisconsin Easterseals camp beyond the two weeks of his clinical nursing rotation this past summer.

Even if that meant sleeping outside the door of a camper with a habit of wandering at night.

“I went there just to knock out my pediatric clinical hours, but I loved the sense of satisfaction I got,” Garcia, a senior nursing student at Dominican University, said of his decision to volunteer as a camp counselor once his academic requirements were met.

Garcia was one of 16 Dominican nursing students who traveled to the Easterseals camp at Wisconsin Dells in July for the university’s first clinical nursing rotation offered out of state and in a non-medical facility setting.

The students were tasked with providing basic care to young campers with physical, developmental and neurological disabilities. That involved treating cuts and scrapes, administering daily prescribed medications and injections, testing for COVID-19, changing gastrostomy feeding tubes, responding to seizures, and everything in between. They also accompanied the children to various activities, like kickball games.

“Every single student said they would do it over again,” said Jonathan Uebelhor, senior lecturer with Dominican’s Elizabeth T. MacNeil School of Nursing, who arranged for the students to participate in the unique training experience. “As tiring as it was, they learned so much — not just about nursing and pediatric care, but about themselves as well. I saw how compassionate they could be and how amazing their critical thinking skills are.”

Uebelhor, who hopes to offer the same clinical experience next summer,

chose the camp because he wanted nursing students to gain experience working with a diverse patient population in a less traditional setting.

The students treated the needs of youth with autism, physical and developmental disabilities, behavioral and neurological disorders, ADHD and other conditions.

“It was rough, and I don’t think they realized how hard caring for a person of varying abilities is day in and day out,” said Denise King, acting executive director of the Elizabeth T. MacNeil School of Nursing. “Definitely their compassion was there. They also learned that kids are kids no matter what their challenges are.”

“What really stood out to me was seeing how the campers interacted with each other,” said nursing student Jenin Teleron, whose work at the Easterseals camp helped earn her Dominican University’s Lincoln Laureate Award this year. “While this group can be stigmatized and looked down upon in society, when they were brought to camp, they didn’t judge each other. They loved each other for what they were and they wanted to be with each other. It was very heartwarming to see.”

“Their innocence was just captivating,” added Garcia. “You had so many different types of people with different needs and it was interesting to see and learn from them as a whole — and learn what communication techniques to apply with them. A lot of the work we did was communication-based and learning how to speak to each individual because no two were alike.”

That included connecting with the non-verbal campers as well and letting them know they were in a safe place, he said.

Teleron joined Garcia in volunteering as a camp counselor for four additional weeks after their clinical experience ended. This allowed the students to work with a population of adults with special needs, as well as youth.

“It was different from my experience as a nursing student,” Teleron noted. “I was doing a lot of personal care — which nurses still need to know — so it helped solidify my skills in that.”

Both say their time spent with the young campers, in particular, solidified their career ambitions.

“Although it’s been my dream to be a pediatric nurse for a while, I had not yet worked with that population,” Teleron acknowledged. “This experience validated that this is what I was meant to do.”

Dominican University nursing student Aislim Picon dispenses medication to a camper during an Easterseals camp at Wisconsin Dells in July 2022. 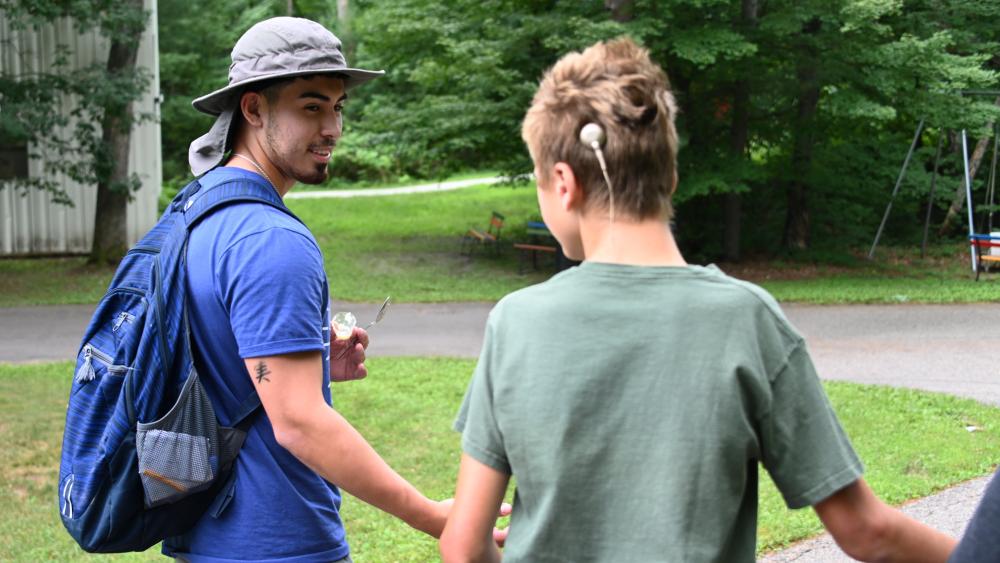