Dominican’s next president is a veteran of higher education leadership, having served at every level from faculty member to university president. 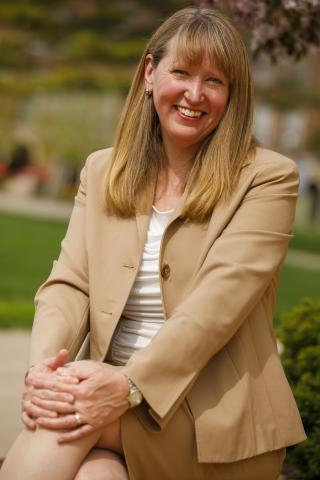 Glena Temple, president of Viterbo University and a veteran of higher education leadership as well as a scholar in botany and plant sciences, has been named Dominican University’s 11th president.

The Dominican University Board of Trustees approved Temple’s appointment in a unanimous vote. She will take office on August 2, succeeding Donna M. Carroll, who has served as president since 1994 and led the institution through nearly three decades of extraordinary growth to becoming a U.S. News & World Report Top 10 regional university.

“The Board is thrilled to welcome Glena Temple as Dominican’s next president,” said Tom Abrahamson, board chair and member of the search committee. “The search process brought forward a diverse field of extremely accomplished candidates. Dr. Temple brings with her an exemplary record of achievement and leadership at multiple levels of higher education and a keen awareness of the challenges and opportunities that lie ahead for Dominican. The Board is certain that under her leadership Dominican will continue to realize its vital mission of preparing students to pursue truth, to give compassionate service, and to participate in the creation of a more just and humane world.”

Temple says she was not looking to leave Viterbo, where she has served in multiple faculty and administrative leadership roles since 2001, but felt drawn to Dominican’s mission, its record of advancing social mobility and student success, and its commitment to equity and inclusion.

“I am truly humbled and grateful for the trust placed in me by the Dominican Board of Trustees and search committee,” Temple said. “It is an honor to follow President Donna Carroll, whose leadership inspired so many over the past 27 years. I embrace this opportunity to help build on her legacy with so many dedicated students, faculty, staff, alumni, trustees and benefactors. Dominican’s justice-driven mission and values deeply rooted in the charism of the Sinsinawa Dominican Sisters spoke to my heart and strengthened my desire to be a part of this amazing university.”

She has also been actively involved with the Council on Undergraduate Research, the Higher Learning Commission and in the La Crosse community.

Dominican’s board appointed Temple after a seven-month nationwide search conducted by a 15-member presidential search committee that included trustees, faculty, staff, sisters, students and alumni. Temple was selected from a diverse pool of highly accomplished candidates considered by the committee. The national firm Storbeck Search assisted in creating an equitable and inclusive search process.

“The Sinsinawa Dominican Sisters join in congratulating Dr. Glena Temple as the next president of Dominican University,” said Sister Colleen Settles, corporate chair of Sinsinawa Dominican sponsored institutions. “Dr. Temple's passionate commitment to and experienced leadership in promoting diversity, equity and inclusion parallels our Congregation's anti-racist commitment and work toward a more humane and just society. We promise to work in partnership with her to continue the academic excellence that is the hallmark of Dominican University, and to create a future grounded in Dominican mission and values.”