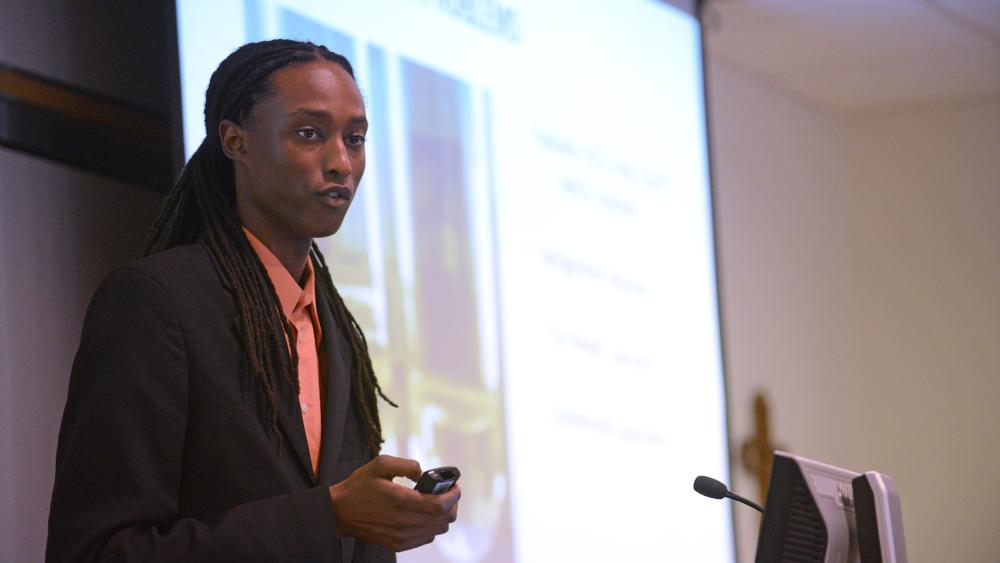 Megan Knape received funds for transportation and materials to develop a collection of digital designs and five unique digitally printed fabrics. She plans to enter her series of designs into the Dominican University Annual Juried Art Exhibition and the printed fabrics will be incorporated into her senior collection. Megan also plans on entering one of her designs into the annual Future of Chicago Fashion Competition put on by the Chicago Fashion Foundation. Megan was sponsored by Tracy Jennings, apparel design and merchandising.

Tyehimba Turner received funds for chemicals and equipment for his Summer Scholar research into the South American Stevia rebaudiana plant which contains many diterpene glycosides, collectively known as rebaudiosides and commonly used as a zero calorie sweetener. This purpose of the project was to isolate environmental microbes that can utilize stevia and identify the gene systems responsible using a reverse genetic screen. While doing this, organisms with novel characteristics were catalogued in a library for future use. Margaret Jonah, biology, Department of Natural Sciences, was Tye’s sponsor.

Karina Cisneros attended the Joint Mathematics Meeting in San Diego, January 9-12, 2013. In the summer of 2012, Karina was part of an undergraduate research experience at Worcester Polytechnic Institute in Worcester, Massachusetts. This was a 9-week program wherein Karina worked with four other students from different universities across the U.S. to understand the growth dynamics of cancer stem cell and non-stem cancer cell populations to develop better understanding of the treatment options for cancer patients through mathematical modeling. The abstract to “Modeling Cancer Stem Cell and Non-Stem Cancer Cell Population Growth” was accepted for the MAA Undergraduate Poster Session. This research project was sponsored by the National Science Foundation and the Center of Cancer Systems Biology located in Boston, Massachusetts. Karina was sponsored by Marion Weedermann, mathematics.

David Gayes attended the 2013 Catholic Social Ministry Gathering, February 10-13, in Washington, D.C. David shared his essay “No Beauty or Truth Excluded” which was published in the Journal of Religion, Disability & Health. David hoped to develop a greater understanding of social justice ministry, as well as network with professionals for possible internships or careers. David was sponsored by Kathy Heskin, theology and pastoral ministry.

Erwin Kehrt used his award to help defray the costs of software he needed for his honors project to build a robot with wheels that is drivable solely by the movements of a user through an interface between a Kinect and Lego Mindstorm. Erwin will share his project and what he learned at the 2014 URSCI Expo. Erwin was sponsored by Cyrus Grant, computer science.

Tyehimba Turner was the first Dominican student to be accepted to present at the prestigious National Council for Undergraduate Research (NCUR) meetings in LaCrosse, Wisconsin in April, 2013. His presentation was entitled “Identifying Novel Genes involved in Rebaudioside A Transport & Metabolism in Environmentally-Isolated Microbes.” Tye was sponsored by Margaret Jonah, biology, Department of Natural Sciences.

Jonathan Cabai received URSA funds to register for the Argonne Symposium, October 26th, 2012, at the Argonne National Lab, Argonne, Illinois, where he presented his research in organic chemistry with fellow classmate Theodore Weyna. Jonathan was sponsored by Daniela Andrei, chemistry.

Jacqueline Glosniak, a double major in journalism and political science, attended the ACP/CMA National College Media Convention in Chicago, October 31–November 4, 2012, to learn different skills to bring to Dominican and to network with journalism professionals. Jackie was sponsored by John Jenks, communication arts and sciences.

Theodore Weyna received URSA funds to register for the Argonne Symposium, October 26, 2012, at the Argonne National Lab, Argonne, Illinois, where he presented his research in organic chemistry with fellow classmate Jonathan Cabai. Ted was sponsored by Daniela Andrei, chemistry.